I’ve always been impressed with exercise bike generator displays at renewable energy exhibits. So, a while back, when I saw a classic Schwinn exercise bike at the thrift store, I nabbed it with the plan to make it into an EXERCISE BIKE GENERATOR!

Earth Week is only a week away, and since our local eco-group is hosting a BIKE-THEMED event this year, I thought I’d “get in gear” and quick put together a bike generator.

I really already had all the parts needed. Mostly, that’s a bike and a permanent-magnet motor. Besides that, it’s just some scrap wood, a bolt, nuts and washers and a bungie-cord.

At the heart of the project is a 12V electric motor. I still had a few parts left over from my electric car conversion project, including the electric radiator fan. My electric car didn’t need an engine or radiator, so I set the fan motor off to the side for future use. I pulled it out for this project. First, I had to remove the plastic fins, which were practically cast in place. I managed to remove them, and get it down to an aluminum hub mounted on the motor shaft.

Next, I cut a scrap of plywood, and used a hole-saw to make a hole in it big enough for the motor to sit in. I put the motor in place, and attached it with three small wood screws.

I drilled a 3/8″ hole through the corner of the plywood, and ran a long bolt through it into the front frame of the cycle. That way, I was able to test alignment of the motor shaft with the front wheel. It matched up pretty well. I would just need to smooth out the hub on the driveshaft and add a stabilizer and tensioner to the motor.

The hub on the driveshaft was bumpy, which made a lot of vibration on the exercise bike tire, and the gear ratio was just a hair off. If I could trim down the diameter of the hub a bit, it would smooth out the ride and allow me to pedal just a tad slower while at the right speed for 12V charging.

I did NOT have a lathe handy, so I thought it would be pretty tough to smooth out the hub. That’s when I realized there was nothing stopping me from JUST SPINNING THE MOTOR. So, I clamped the motor down to a work-table, grabbed the jumper cables from my truck and a 12V battery, and just spun-up the motor! I then used an angle-grinder (with a flapper disc) to smooth down the hub, and reduce its diameter a bit. Because it was spinning at high speed, it came out perfectly concentric and balanced. Not bad for an improvised “poor-man’s lathe”. I put the motor back onto the cycle and added another piece of plywood opposite of it and a cross-piece to made a basic box shape. This holds the motor solid and lets it swing up and down but NOT side to side.

At that point, all that was left was a tensioner. I added a drywall screw to the wood and attached a bungie-cord from it to the base of the cycle. That applies a light, but steady, force of the motor against the wheel.

I clipped my volt-meter to the two wires coming off the motor and pedaled. Sure enough, it was pretty easy to pedal at a rate that gave me an output voltage between 12-14 volts, what’s needed to charge a 12V battery.

After that, I hooked it up to my Fenix Intl. Ready Set – a 12V battery with built-in charge control and 12V and 5 outputs. It also has a nice charge indicator light on it, and universal power input on the back, meaning I could just run my bare wires straight in and tighten them down without even needing tools. I then only have to pedal fast enough until the “Now Charging” light comes on to know what speed I need to maintain for 12V charging.

This isn’t exactly a fancy or high-power exercise bike set-up, but it sure was easy to build. I did some testing, and it’s simple to output 10 watts of energy. That’s just about perfect for charging an iPad. That also means it’s pretty easy to do something like designing a setup where if you want to watch a movie on the iPad, you have to pedal to make it happen!

Just think how much more fit the average American would be if we all had to pedal to watch TV!

This project took about an afternoon of work and cost me $8, the cost of the cycle at the thrift store. I already had the motor, nuts and bolts, bungie-cord and scraps of wood. All in all a nice little weekend project.

Have you built your own exercise bike generator? What do you power with it? What did you do different on your design? Let us know! 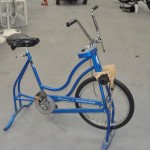 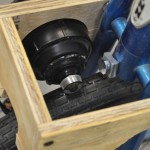 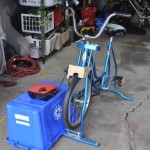 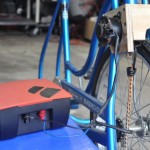