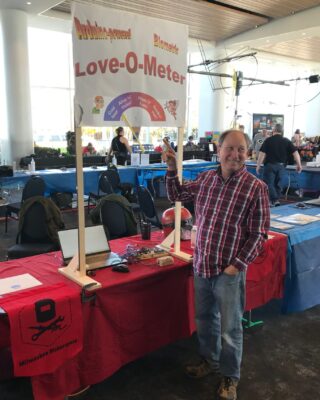 Jon Drayna’s Love-O-Meter used biometric sensors linked to an Arduino to measure “how much love is in your heart” at the Milwaukee Maker Faire.

The Love-O-Meter was one of many displays offered by Makerspace members at the 2022 Maker Faire, at Discovery World Oct. 19 and 20. The gizmo, created by Jon Drayna, measured galvanic skin resistance, skin temperature and squeeze pressure, all fed into an Arduino to come up with a score to supposedly showing “how much love is in your heart.” Junk science, of course, but a great way to introduce people to the amazing Arduino. Hats off to all the creative MMS members showing off their inventions, creations and art at the Maker Faire. 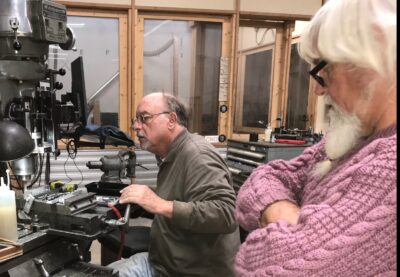 Responding to an urgent call for help in Ukraine, MMS member Steve Birkholz is making parts for much-needed surgical supplies. Steve, a retired orthopedic surgeon, is in touch with Polish surgeons who are in Ukraine helping to treat people injured by Russian attacks. The Polish doctors have asked for supplies to stabilize badly broken leg bones. The materials will be shipped over ASAP. Members Glyn Livermore (at right) and Jon Drayna (not pictured) are helping, as Steve tries to set up a mini-assembly line to make around 100 pieces.

If anybody’s curious, here’s a video update on my steam engine project. I upgraded the oil burner 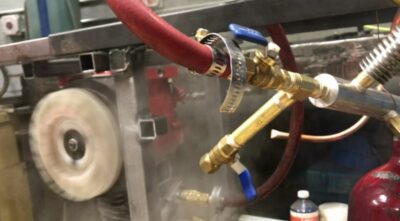 , although I’m having trouble getting it dialed in. I also decided the heat needs to transfer through the wall of the boiler better, so I welded numerous little tabs on it to create a sort of reverse heat sink. It does run, as you can see in the video (which for some reason I can’t post directly here). This link takes to you Youtube for a 1:10 expo.

We’re having some fun now!

Wolfgang Siebeneich works with wood and metal at the Makerspace.

Among Siebeneich’s many projects at the Makerspace is rehabilitating tools that have been misused.

“Doesn’t take long for tools to get bad in the woodshop,” said Siebeneich . “Tools in this place get … abused a lot …. But I’m gonna clean these up and rehabilitate them and then put them back in the woodshop and see how long they live. And I don’t expect them to last very long.”

One such tool is an adze. Adzes are ancient instruments used for carving wood.

“One of the earliest known uses for them is for hollowing out logs for canoes. You use it much like you would a hatchet,” said Siebeneich. “I’ve been really happy with the way these work.”

Siebeneich enjoys making useful items despite his finished projects sometimes being underused. Siebeneich said, “One [project] I did about three or four years ago is building a kickwheel for the pottery area … It took me about three weeks to make it and for the next two years nobody ever used it so it seemed kind of a waste. But it was a fun project.”

“I do get a great deal of satisfaction from doing a project successfully,” said Siebeneich. “The reason I’m proud of them is not anything I do with craftsmanship…but I’m proud of them because they work, beautifully.” Thanks to Steve B., Wolfgang, and Rick for help on my first woodworking project. Turned a branch of walnut into a plaque to display some antlers. Turned out much better than I imagined.