Recently, I was hanging out at the Milwaukee Makerspace, working on a simple project, when a fellow Maker offered me a used 5AH lead acid battery.

The project I was working on involved using landscaping lighting, and right there on the “Hack Rack” were some old computer power supplies. Hmmm. We also happened to be talking about Zombie movies and TV shows, when it all clicked – I have the skills and materials to build an electric lantern from scratch using just the materials that are right here!

The project started by taking apart a computer power supply. I snipped the wires from switch and power cord connection close to the circuit board, so that I would have plenty of wire still soldered to the switch. After removing the circuit board and cooling fan, I had a nice empty box to use as the case for the lantern.

Next, I snipped out the fan grate, to allow for the 12V 11watt landscaping light bulb. These things are designed to run on 12AC from a transformer, but nothing is stopping me from running it on a 12V battery instead!

I crimped on a couple of spade connectors onto the wires from the switch to go to the battery and the bulb. I also wired the power port so that it was unswitched (always connects to the battery) that way, I could use it to recharge the battery without having to open the case. I would just clip the external battery charger that I already had to the two pins of the port.

Once the wiring was done, I checked the connections, turned it on and off a couple of time, and then glued the bulb in place with silicon.

A key feature of a lantern (as opposed to a flashlight) is that it has a distinct handle on the top, which the lantern hangs from. When I’ve made handles before, I’ve usually used a pair of bolts with spacers and some sort of cross-piece of wood or metal. However, I didn’t have anything like that handy, and it didn’t seem to fit the theme of the lantern either.

I DID have all the extra wiring from inside the power supply. The main bit of it was already bundled and had a nice connector on the end. I drilled two 1/2″ holes in the case cover and ran the cable through it, then back through the other hole, and pinned it in place with a few zip-ties.

I also glued two bits of foam on the inside of the case to cushion and help hold in place the battery. With that I put the cover back on and reinstalled the four cover screws.

There ya go! A lantern made completely from repurposed, recycled, and salvaged materials! Whether you like tinkering, being ready for the zombies, or just like being prepared, the Hack-A-Lantern is for you. Why don’t you try making one and see what you come up with! 3″ O.D./2.75″ I.D. tube is appropriate for a ceiling-mount shade holder.  That greatly simplifies the wiring and allows a standard bulb to be used.  Incandescent bulbs get much hotter than CFL bulbs.  Airflow around the bulb is likely to be restricted.  Cooler bulb is better.  Distorted or discolored acrylic is not pretty.

Acrylic tube is not the only option.  Transparent PVC and polycarbonate are also viable.

Spacing between “vanes” is important.  Because the light-source is inside the bricks, they will cast dramatic shadows and restrict the amount of light projecting into the room.  The 3 screws attaching the tube to the shade holder require equidistant holes.  Space must be left for them.

A child may not understand the difference between decor and toy.  A ceiling mount places it out of reach.  The 3-screw attachment should be easily adaptable to other mounts, should they be desired later. Each brick hinges on the corner nub of the brick below & behind it.  Thus each one is half a brick ahead of the one below & behind it.  Brick edges are straight, so the ends will only touch the tube at their centers.  A triangle, formed by the center of the tube and the centers of connected bricks, has a vertex of 12° (see illustration).

Use a template to ensure the bricks are glued in the correct orientation and spacing around the tube.  The template has brick-shaped holes for already-attached bricks, and indicator-lines showing where the next brick should be placed. The thickness & rigidity of the template material are important.  In this illustration, the template rests on the red layer of bricks, is held in the correct orientation by the yellow bricks, and supports the new, green, bricks while the glue sets.  If the template is too thin, the leading edge of the new bricks will drop.  Instead of stair-stepping up the side of the tube, the “vanes” will droop and level-off.  If the template isn’t rigid (say, cardboard), it will flex under the new bricks with the same result.  (I used sheet acrylic.)

The Tube:  How long should it be?  As long as you want.  In my case, I noticed that 6 inches is an even multiple of the brick-height (3/8″ per brick * 16 bricks = 6″).  So my tube is 6 1/2″ long.  The extra half-inch is to accommodate the nubs on the topmost layer of bricks and provide clearance for the shade-holder.  I cut the tubing on a table saw.  The technique recommended by the manufacturer is to raise the saw blade to just above the thickness of the tubing, then rotate the tubing, in place, on the blade.  In my case, I used a cross-cut sled to ensure the cut was perpendicular all the way around the tubing.

The LEGOs:  16 bricks per “vane” * 6 vanes = 96 bricks.  I decided to use equal numbers of each color, so I needed 24 bricks each of red, yellow, green, and blue.  I purchased used bricks and a large LEGO plate in an on-line marketplace. Don’t cut the red ones!

Because each brick must rotate 12° relative to the brick on which it sits, 3 of the 4 nubs must be removed from one side of each brick.  Important: Decide which way your bricks will rotate before you remove the nubs, and remove the same 3 nubs from each brick!  In the illustration, the red nubs are closest to the tube.  Do not cut those!  Those are the pivots for the bricks that will attach to them.  If you want the bricks to spiral clockwise up the tube, remove the blue nubs.  If you want counter-clockwise, remove the green nubs.  Note: you don’t need to remove the nubs from the top-most 6 bricks.  In fact, it will probably look better (from the ceiling, anyway :~) if you don’t. My set-up for removing the nubs

I used a rotary tool, fixed in a stand, to remove the nubs.  I used a standard cut-off disc.  I adjusted the height of the tool so that the bottom of the disc was at the bottom of the nubs.  I used a big, green LEGO plate to hold the bricks in place, while I cut them.  The plate allowed me to keep my fingers well-away from the spinning blade, but still manipulate the brick being cut.  I left a gap between the pivot end of one brick and the next brick.  This made it easier to avoid accidentally removing the pivot nubs.  (Note: molten plastic is hot.)  After cutting, the bricks required some touch-up work with a knife, to remove the plastic still attached to the edges.  Also, the nubs are discs that sit atop holes in the brick.  Removing the nub reveals the hole. The Template:I found some scrap acrylic of the correct thickness. Shane was kind enough to redraw my template sketch as a vector, and show me how to use the Makerspace’s laser-cutter (Thanks, Shane!).  We cut the template in multiple passes.  The first pass included the outline for the “next-up” brick.  Subsequent passes did not.  That produced the desired through-cut with adjacent guidelines. That’s as far as I’ve gotten.  I’ll post again when the project is completed.

My sister is a Theater Manager at the Patel Conservatory in Tampa, FL.  About two weeks ago she texted me and asked if I could make her a prop she needed for an upcoming production.  “How keen would you be on making me a mirror for “Beauty and The Beast,” she said.  “They want a mirror that lights up and sparkles like the one from the movie.” Even with limited experience just tinkering around, I knew I could do something fairly easily, so I agreed and got to work. 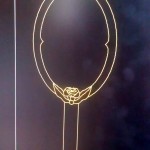 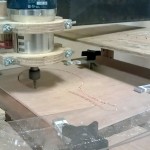 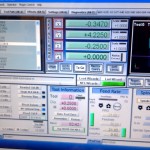 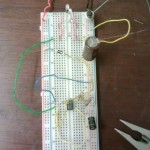 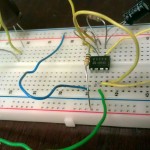 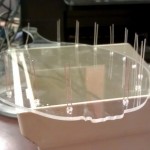 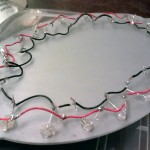 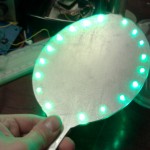 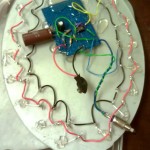 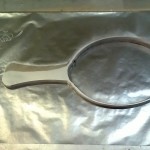 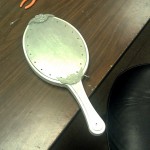 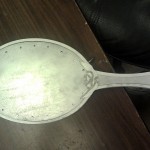 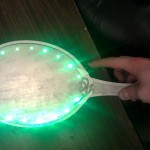 I combined two different circuits (a 555 timer to flash and a RC circuit to fade) and built a wooden frame with acrylic plates for the front and back.  The wood and plastic were CNC-milled, then sanded and painted before the electronics were installed and glued into place.

The result was a fairly decent-looking, shiny, light-up hand mirror with a small thumb button on the right side that flashes 16 bright green LEDs when pressed.  It all runs off a single 9-volt battery and the back can be unscrewed to replace it should it ever die.

Total build time from start to finish was probably close to 15 hours over the course of one week.  The play was Thursday, July 19th and from what I’ve heard, it was a great success.  I’ll add pictures from the performance if I get some. Yeah.  Having access to a laser cutter is pretty boss.  I’m planning to wear this to the premiere of a certain movie this weekend.  Four layers of acrylic; two diffuse, two opaque.  11 LEDs, 11 100 Ohm resistors, some phone cord, some solder, and a 9V battery.  There’s no lack of great pages on Instructables about how to make your own.

In addition to the usual hackery and makers working on their electric cars, Bret fired up the forge again last night.  Rich turned some horseshoes into hangers, Adam flattened a steel rod, and Royce folded a metal bar. 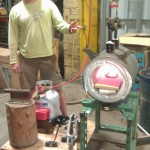 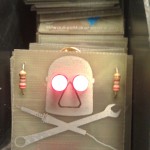 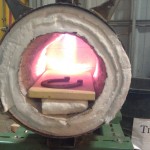 In preparation for BarCampMilwaukee6 (this weekend!) Royce and I have been mass producing circuit boards for a “learn to solder” class we’ll be holding.  The boards are 1.5″x1.5″ square and include a battery, two resistors, traces in the shape of our logo, and two red LEDs for eyes.  The copper traces were tinned using “Tin It” to prevent oxidation and make it easier to solder.  We’ve made 65 of the “tie pins” so far and the project gave us an opportunity to tweak our methods for PCB etching.  We prefer etching with ferric chloride, but muriatic acid and hydrogen peroxide are looking more attractive as they’re cheaper chemicals, can be obtained locally, and etch much faster without heating.  Also, red Sharpie markers seem to work really well at cleaning up traces with the muriatic acid solution.  Specifically red, not sure why.