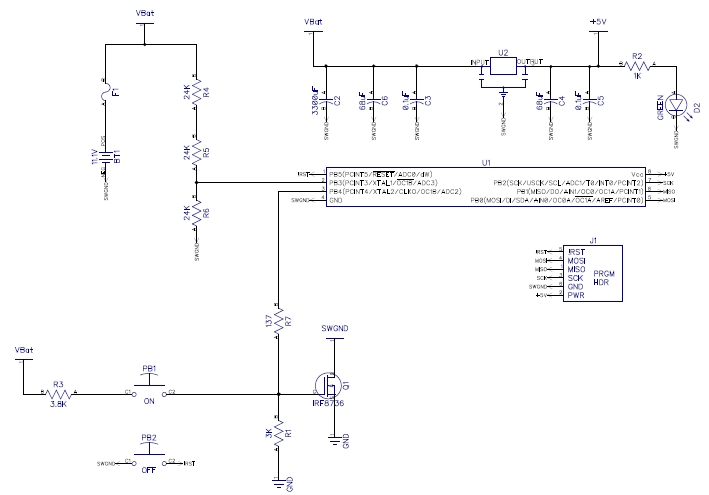 I’ve been working on a protection circuit for medium large Li-Ion battery packs. The target application is a remote controlled car chassis, converted into a robot, and a Bioloid 20 servos humanoid robot.

The features I am looking for are:

To get that I’m going to use an ATtiny45, because I have a bunch of them, and the IRF8736 TTL switching mosfet that is good for 18 Amps. The mosfet connects or disconnects the ground from the load circuit to avoid any issues with the required gate to drain voltage.

Switch PB1 is how the circuit gets turned on. That switch allows current to flow through the voltage divider formed by R1 and R3. The divider winds up putting just a little over 5V on the mosfet gate when the battery is fully charged and some where a little under 4V when the battery is getting empty. Even 4V should be enough to get the voltage regulator to fire up the ATtiny which then powers up pin PB4 to hold the mosfet open with 5V.

Switch PB2, resets the ATtiny which in turn puts PB4 into high impedance mode allowing the mosfet gate to drain to ground via R1. Thus the device is turned off.

I’m only in the design phase now. The circuit seems good, but I still need to breadboard it to make sure it works as I think it will. But that’s another post.