I’m getting married in less than a week from now. My fiance and I didn’t want to use a traditional unity candle for our ceremony, so I came up with something a little different. I used some RGB LED strips to create my own LED unity display.

Completing this project required using the laser cutter, the CNC router, making my own PCB, and even a little bit of wood working to put the frames together. 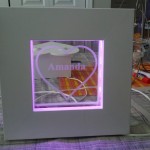 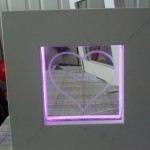 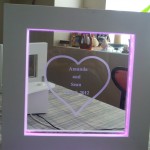 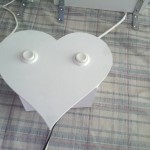 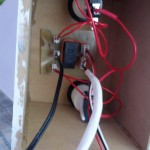 Relay Circuit Inside the Control Box 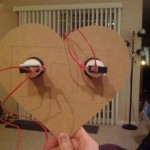 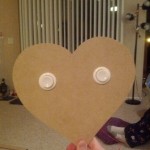 Top of Control Box (before paint) 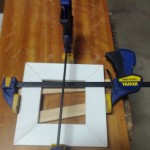 Gluing the Frames Together 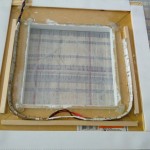 I recently purchased a couple of XBee modules from Sparkfun for a new project I’m working on.  I’ll be using them to send a wireless signal from an ice fishing tip up when a fish is on the line. I was frustrated after I received my XBee modules because I realized they do not fit into a standard breadboard!

After I got over the initial frustration I started designing a breakout board that would allow me to use the XBee modules with a breadboard. I used Dip Trace to design my first two sided board. After I got everything laid out in Dip Trace I etched the board using the equipment at the makerspace. I used our standard process for etching the board.

Here is the finished breakout board. 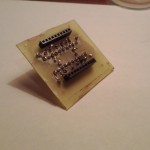 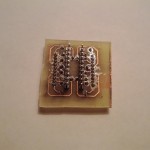 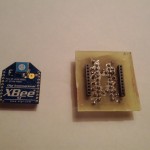 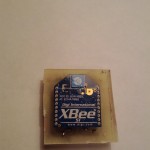 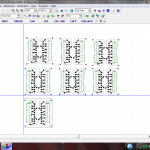 My line following robot is another step closer to being completed. I finished soldering all of the components and connected the battery to test the circuit. The next and hopefully last steps are to attach the circuit board and motors to the body. Today I stopped by the makerspace to etch the circuit board for my second robot. The robot is a very simple line follower that uses a LM393 dual comparator IC. The complete design and build instructions can be found in the book Robot Building for Beginners by David Cook. Jim Burke from Pumping Station: One has created a kickstarter project for the 2012 Power Racing Series. The goal is to raise $20,000 by October 20th. The donations will go towards funding a new timing/scoring system, more races, safety equipment for drivers, and a few other things. We have participated in this event the past two years, and we had a great time both years. We are looking forward to next years races.

Please donate to this awesome kickstarter project at http://www.kickstarter.com/projects/308894311/ppprs-the-power-racing-series

“The Power Racing Series (PPPRS) is an event where Hacker/Whateverspaces turn those toys cars that everyone wanted into highly competitive sort-of racing machines. Teams are allowed quite a few liberties (motors, batteries) but we also made a few restrictions so you masochistic engineers can pleasurably cry yourselves to sleep at night. You have $500 to do this with (aside from safety equipment, cause we don’t want to mop you up either). You also compete in three events, and you’ll have to do more than just drive fast (re: be entertaining) to win points. After all, it’s not like we want an actual race to break out. Oh and it is rather unsafe, so you’ll sign a waiver. You built it, so we knew you’d understand.” See the Power Racing Series website for complete details about the 2012 season and kickstarter project.