I always have the best of intentions. When getting invited to a costume party, I plan to put lots of time and effort into it to create an EPIC costume. Time after time, I put it off and come up with something at the last minute.

The great thing about a costume is that you DON’T have to spend lots of money on one. In fact, you can create a very good costume, just from clothing and props you already had.

Recently, a friend had been working on a Star Trek prop, which got me thinking about how simple a Star Fleet uniform would be to make. Not a perfect one full of detail, but something fun, simple, and cheap.

To start, I gathered together a red T-shirt, black pants and shoes. I didn’t have a long-sleeved shirt, so I just layered the red short-sleeved over a black long-sleeved T-shirt.

A Federation insignia or communicator badge is an important element to the costume, but is simple to make. I just went to the web and did an image search. When I found one I liked, I downloaded it, scaled to to about 2.5″ tall in my graphics software, and then printed it onto tag-board with my inkjet printer. I cut out the insignia, and put a piece of tape on back. A safety pin glued to the back would work great as well. From just a few feet away, it doesn’t look like paper at all, it just looks like the logo you expect to see on the uniform.

Of course no Star Fleet Officer on an away mission would be without a phaser. I had several to pick from: a TV remote, an infrared thermometer, or my cordless beard trimmer. Basically any dark plastic item that you can point threateningly can be a phaser. I chose a digital tire pressure gauge as my hand-weapon of choice.

Also handy would be a tri-corder. I DID spend a bit of money on this one – $.99 cents. Since I happened to have a smart phone, I downloaded a tri-corder app. It has lots of blinking lights and sound effects that add considerably to the outfit.

I also wanted to point out that I was NOT a main character. Nope, not Kirk or Picard or any of those guys – just a nameless red shirt that’s guaranteed to get killed by the alien/monster of the week. To do so, I created a “Hi, my name is:” badge from a computer-printable address label and a marker. I tried both “Red Shirt” and “Expendable” as name-tags. At the one costume party I went to, people got the joke and had a good chuckle – and then had an urge to kill me…. (Lion-O quickly took me out with the Sword of Omens.)

So, remember, a costume doesn’t have to cost a fortune in time and money – just recycle some clothes and other items into a simple and clever outfit anyone can appreciate.

Ron Bean recently wowed the world & the Milwaukee Makerspace with his new invention, the “Spaceship Chair”. Now everyone is wowed again now that an actual real life Space-Man has come down from the cosmos to test the chair. No word on what galaxy he was from, but he was quoted as saying, “This chair is out of this world!”

We have this one verified image of the Space Man enjoying the comfort of Ron’s Spaceship Chair! 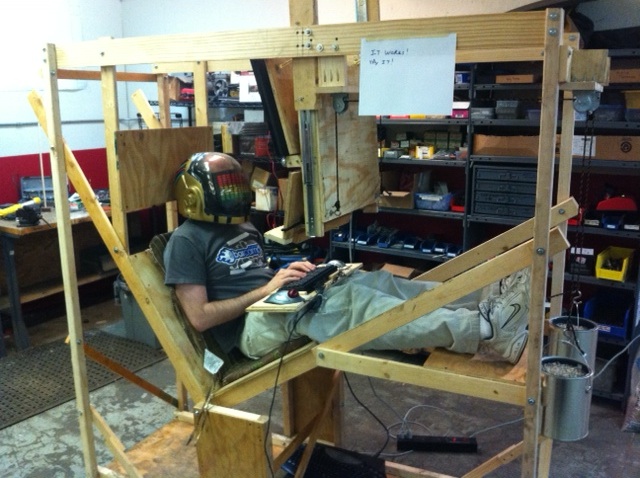 Congratulations to Ron for bridging the intergalactic boundaries with his universally adored chair!

For more information please check back here at www.milwaukeemakerspace.org !