Feedback and constructive criticism can be great tools for planning and managing any sort of endeavor.  Gauging the interests, concerns, and opinions of our group can help us make better decision on how to spend time and money as well as working with each other and the community.  Last month we asked our members to take a survey and share their thoughts with us.  Why do people come to Milwaukee Makerspace?  What do they do here?  What would they like to see more of?  What can we do better?  44 members responded (or about 39% of the total group) and after spending some time slaving over spreadsheets, we published the results.

Two of the biggest questions we asked survey-takers were: 1) What do you come to Milwaukee Makerspace for? and 2) What is important to you?  The following results can be found in our 19 page report, available for download here:  http://wiki.milwaukeemakerspace.org/_media/2013_annual_mms_member_survey.pdf 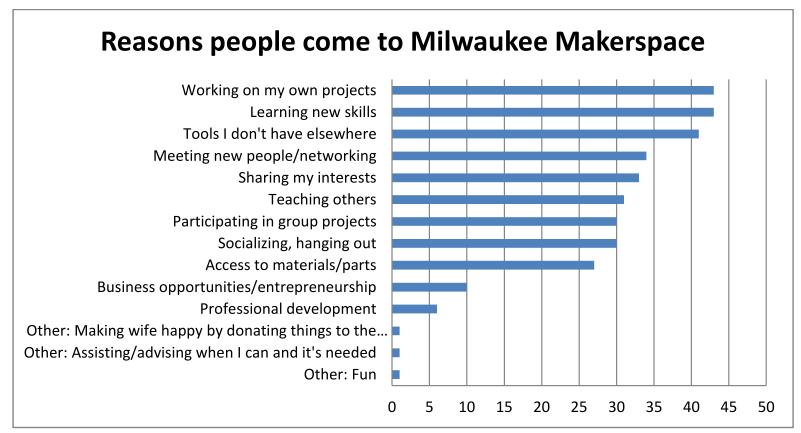 It seems like just four months since the last Bay View Gallery Night… oh wait, it was!

We’ll once again have a group show, this time titled: More Awesome Things From the Makerspace, which is our way of saying “come check out all the crazy things we do!”

It’s all happening Friday, September 27th, 2013 from 5pm to 10pm. And as always, we’ll have some sort of magical surprise to knock your socks off!

(Or who knows, maybe it’ll be something that gently removes your socks and then carefully places them into the nearest laundry basket…) We’re doing it again! For a second year in a row, we want to provide a local maker with a chance to become a member this summer, and do something awesome.

Milwaukee Makerspace is proud to be a part of Milwaukee and to provide a shared workspace where people can explore their passions in making things, whether it be art, technology, electronics, alternative energy, or rapid prototyping and fabrication. Our members are eager to share their skills and equipment with others, and we recognize that we learn better when we learn together, so we’re introducing a “makership” program, which will allow a local maker to become a full member through a sponsorship from the group.

If you’re interested in joining us and gaining access to our space, our tools and our community, come up with a killer idea and apply today!

Find out more at: http://milwaukeemakerspace.org/makership